Sharing the same sensor and near identical specs, the newly announced Canon EOS C70 Cinema Camera is often referred to as a a pocket sized version of the Canon C300 Mark III. The C70 sports a 4K Super 35mm (DGO) Dual Gain Output sensor that combines parts of two different exposures to create a single image with 16+ stops of dynamic range. The EOS C70 is also capable of recording DCI 4K at up to 120 fps in 10-bit 4:2:2.

I'm a big fan of this new design. Perhaps because i've been shooting a lot of video on DSLR and Mirrorless bodies over the years. The small form factor design is looks very similar to a large DSLR body like the 1D series, but has the button, dials, and controls of a higher end EOS Cinema camera. Somehow Canon still managed to include a built-in ND Filter system, dual SD Card slots, and two mini-XLR inputs, and also a Timecode in/out via SDI. 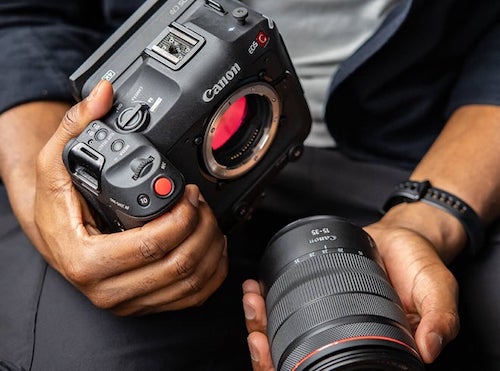 This camera looks solid in build quality, features, and pricing. There's just too much to list here on what this camera is capable of doing, so I recommend checking out the Canon C70 Explora article via B&H (click here).