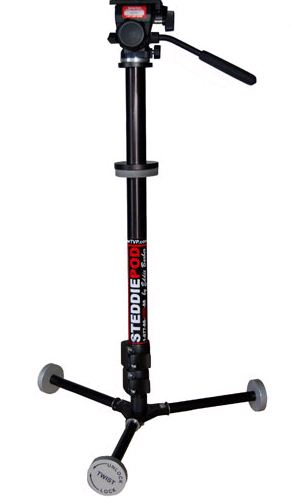 It's called a Steddiepod and it's available for around $389.00. Now before you go out thinking about buying a stabilizer like this, you need to reflect on one my first DIY's in the DSLR world here: http://cheesycam.com/?p=18

Just thought I would show the basic principle of how I believe this Steddipod is supposed to work. If you've checked on my earlier article, i've used the same principal of spacing the lower weights. (not sure if my version was out first and now it's catching on). On the bottom of the Steddiepod, those legs that hang out 'might' be some type of counter-weight set. By spacing the lower weight very wide, you'll totally minimize movement while walking. I've since redesigned my version from a wooden dowel into an adjustable Monopod with a wooden plank spacing Foundation Bearings on each side (from home depot). You can make your own for probably under $18.00 dollars, or you can opt in for something like a Steddiepod for about $389.