For the price you pay and for the amount of diffused quality light you get from CFL Softbox kits, they are a great option in the studio. CFL Bulbs transmit more light from the sides than from the top of the bulb. Alzo has recently added a video demonstrating this and how their new Alzo 200 Economy Softbox was designed around this principle.

In our studio, CFL lighting is our primary source, but it's not something we enjoy traveling with for a few reasons. While CFLs will generally provide a better diffused light source than LED panels, you can't power them over typical DC batteries when on location. Still it's not totally impossible to find AC to DC battery packs, if you want to carry the extra gear.

One other complaint about our CFL Softbox kits is that it uses 4-5 light bulbs which on a three light kit adds up to 15 fragile light bulbs we need to pack. The Alzo 200 Kit addresses this by using (2) large CFL bulbs and allowing you to remove the entire head unit that stores away in an optional padded Alzo carry bag. 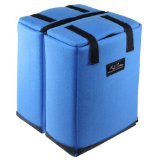 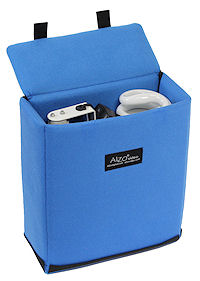 Our CFL Kits also have fairly complicated softboxes that are difficult to setup and breakdown. We don't really mind since we had no plans to transport our kit, but for this issue the Alzo 200 Economy CFL Softbox Kit addresses this by using a special 'umbrella' type pop up soft box. 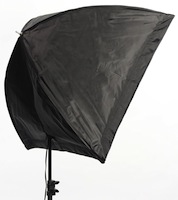 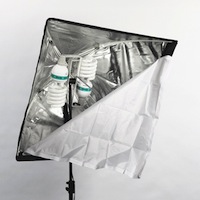 The diffusion of CFL Softbox lighting makes it great for infinite white studio setups, or even green screen (chroma) backdrops. They draw very little power and generate almost no heat on your subjects. You can place them very close and still have excellent soft diffusion, but they don't have the control of dimming like LED panels.

Overall Alzo has put together an interesting kit for people that prefer CFL lighting. The Alzo 200 Economy CFL Softboxes have an efficient design for maximum light output and at the same time remaining travel friendly. A good kit for the money, so long as you aren't heavily relying on a DC battery source at your locations. More about these lighting kits can be found at https://AlzoDigital.com. 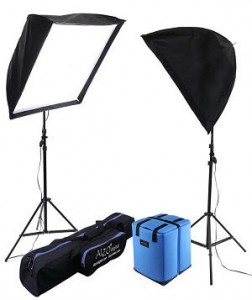