So many people want to go with the biggest and baddest crane/jib ever, but later find out it's just too cumbersome to be useful. My advice is to get at least two cranes, and start with the smallest and lightest one for your camera. You'll enjoy using it more often, and if you need something bigger you can buy your second one later, and trust me you'll still end up keeping your smaller one. Also having a lighter setup will allow you to use dolly tracks for both rolling and vertical movements at the same time.

A majority of the small Jibs around 4ft. don't have tilt functions, but I specifically went to these cranes because I found myself not really using it. The video above from Vimeo member Meld Multimedia is another fine example of movements that can be had with a lightweight 4ft. jib. Unfortunately the version he has is out of stock, the version I have is out of stock, so the next best budget option would be from the ProAm line which has had excellent reviews for it's price. [Thanks Jason] 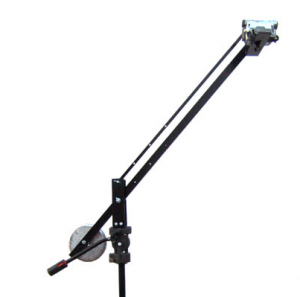