takes place on the market. This one is coming from F&V, which is the same company to release the popular Z96 LED Video light. Full roller bearings, folding legs, rubberized feet, and comes with travel bag. Looks like a solid build, but with Konova's recent Crank Pulley and Motorized Upgrade kits, there's still more expansion to go with a Konova slider. Unless F&V is thinking about adding something different to their sliders, it's going to be a tough market to jump into. (Click here to find F&V Camera Sliders) The Z96 next to the latest W12. If you don't know the story, the W12 is pretty much an exact form factor replica of the Z96 except they've replaced the LED lights with high power ones. I snapped these images before walking out of the studio last night. I'll be in later to snap some example light comparisons. I'll try to have some side by side lighting examples later today. These W12 high power LED lights are found at (click here). The Z96 prices have also stabilized somewhat. They can be found on eBay (click here)

, but make sure they are selling the 'real' F&V branded light since there has been quite a few replicas floating around. If you're unsure, you might want to check out Amazon for the real version of the Z96s.

Ok, in all fairness this may not have all been perfect tests, but the final result in using a LAV microphone in this type of situation shows how effective it can be, so i'm going mainly off that result. So before other people start commenting on this video, i'll blog a little bit.

First test. The HG10 may have had some type of AGC turned on as I can hear the audio fluctuate up and down. If it were on, of course that may not have been a proper test, but a busy highway in the background is no place to use in camera microphone. So let's not look too closely at that first part of the review.

Second test. The Rode VideoMic was placed over the camera, and it's possible it could have performed 'a little' better if the AGC was turned on. Since the highway was behind the subject, placing the Shotgun over the camera towards the noise also would not be a proper test. It would easily pick up the noise in the background. Shotgun microphones like this would be best used on a Boom Pole off axis and possibly just pointing down onto the subject from overhead. Obviously we don't always have a second hand with us, or a boom pole handy, so let's not look too closely at test #2.

Third test. This is a good example. It's highly possible the AGC might still have been enabled on the camera, and may have been able to fine tune sound without AGC, but you really see the difference in using a LAV microphone in a very loud and noisy situation. I wish I had these in my pocket when I shot in a nightclub trying to do an interview with two people. The background music was soo loud it was really hard to isolate the subjects from the background noise. For even better sound you can give your subject a quality hand held microphone. For those times you may want the microphone to be discreet, for $20 dollars, the ATR3350 can get you closer to the audio you want to use in your final project. So big thanks to Cody for just taking time out on the side of a busy highway and running some basic audio tests late night for everyone to consider. Thanks Cody! An image of a Z96 LED light on a Glidecam HD4000 + Steadicam Vest + Rode VideoMic + Canon 5D Mark II + Battery Grip + Zoom H4n shows up in the wild. Well it wasn't really that wild. Somehow an image of just a small part of my rig showed up on the BayCitizen.org website, as I was part of the video team covering the Craigslist Foundation Boot Camp event over at UC Berkely. I was the only one roaming with any type of Steadicam, let alone a Steadicam Vest and sure did get lots of attention and questions about the rig. It's smooth to fly, gets good audio from the Rode VideoMic shotgun + Zoom h4n (on the lower sled - not seen), and when cruising indoors I have the ability to switch on some extra LED lighting. It's a versatile setup that works for me, and I use this same setup consistently for many types of event coverage. It's change a little bit, but you can see more of the Steadicam + Glidecam rig I've assembled in this article. Wow, just caught a comment about the new Z96 DSLR Video lights being sold on eBay. Right now they are using my video review on their Z96 Video Light auctions! (you can see it on the top right of the image above). Very cool! Normally I worry about my reviews being used on certain items, but for this particular one i'm really honored to be recognized along with. It's such a great product and price which equals huge savings for such an important tool in the DSLR bag. I'm going to order three more to create a 4x4 panel and grab some additional Eneloop batteries.

I really put mine to a test this weekend when shooting for a wedding and I could not be more happy. Though it was daylight, I found myself constantly using the Z96 LED light the entire day to add additional fill inside these dim lit hotel rooms. Now it makes total sense why people are looking to use these LED lights off camera. You might have heard me say I never used the older 126 LED light at full power because it was quite offending and the spotlight effect is very direct. I kept the diffuser on the Z96 which diffuses really well and isn't as offensive and ran it full power most of the day for use as fill light. My Eneloops ran all day all night no problems throughout the whole event. The new Z96 LED is not only powerful, but power efficient. Although the Z96 LED video light can adapt other power sources such as Sony or Panasonic camcorder batteries, I suggest you go with the Eneloop AA's to keep the unit very small and compact instead of a big rock hanging off the back. For external long duration use, the Z96 even has a DC input to plug into the wall, Crazy! (wall adapter not included).

There were photographers on site also who were really impressed with the Z96 LED light, they kept asking me where to buy it and looked pretty stunned when I mentioned the price. I guess they don't read Cheesycam for the cheap deals we find and share. The photographers used as much natural lighting as possible, but when they saw how we were using the Z96 as a fill light to balance exposure from the backlighting, and also used it as a 'catch light' in the eyes of the bride during close ups, the photographers were all over it! We also use the LED lights hovering over the brides jewelry when doing close close macro shots. The extra lighting gives an awesome sparkle to rings and provides a white reflection in the silver. I had absolutely no problems with this light. Feels very very solid, the position on the adjustable neck held strong (which was important as we waved the camera around over a wild dancing crowd). I threw this light into my bags as we moved from location to location without worry of cracking or breaking anything. It's again, really solid.

As demand grows, and as popularity follows on the new Z96 LED video lights, prices are always subject to change. I have no doubt that this will be the most common Video light for any event videographer DSLR or not, and I think it's very cool that they considered using my video review. Awesome..... Since the Z96 DSLR light has great diffusion and color, and can be stacked together to make One Larger light panel, people have been asking about using the now popular Z96 DSLR Dimmable LED Lights off camera with a stand. This would work great, even as basic fill light outdoors. Here's two really cheap options to get these lights setup so that you can use them off camera. The first one is just a standard foot that should come with most flashes. Under these adapters is a standard 1/4 x 20 thread to place directly on top of any standard Tripod. These run less than $3.00 dollars + Free shipping. Since the neck of the Z96 LED is already positionable, as well as the Tripod you're mounting to, you won't need a bracket that tilts. Carrying around a full tripod just to hold these tiny lights would be excess, so you can go with lighter 'Light Stands'. If you're going with the lightstand route, sometimes they have a 1/4 x 20 threaded tip so you can use them with your Foot type adapter. If not, then you'll have to grab one of these Light Stand Umbrella Flash Brackets. These can mount any type of shoe mounted accessory including your Canon or Nikon flash. I happened to have many of these I use for Photography positioning my Flashes off camera. This might be a better buy if you're planning on using these for off camera flash photography since flashes can't be as easily tilted. You can find both of these options following this link to Shoe Type Speedlite Brackets. Some new things came in, and i'll be talking about them soon after I test them out. First up is the Z96 LED light that many are saying will be replacing the popular 126 LEDs. I'll test it out to see what the build quality is really like and compare it against the 126 LED (which I own three of). I received my Z96 LED light from this seller.

Secondly is the Yonguo Live View Shutter Remote. This mini LCD is supposed to display the Live View from your camera in case you're setup on a crane / jib, or or on a Palo Alto adapter. The mini LCD also has a few button options to fire off your cameras shutter. I went ahead and purchased 3 cables 5D Mark II, 7D, and a T2i cable to test against all the cameras to see how it works. I grabbed my Remote LCD Live View Shutter Cord from the cheapest seller found in this article here. 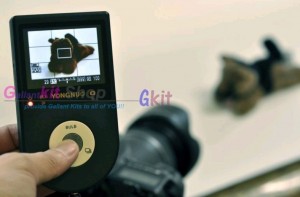